Many of us in the 4.7 million Scots Diaspora in Canada are anxious at the real possibility of Alex Salmond (memorably characterised in a recent newspaper spread as the ‘ultimate snake-oil salesman’) persuading a majority of voting residents to throw off the UK and the nefarious ‘English’, and so consign our long and world-changing shared history to the dustbin.

As one whose heritage reflects both of the founding cultures of modern Scotland, the Gaelic on my Anderson/MacDonald/McKeddie side and the Lowland Scots/Northumbrian Anglian on my Watson-Weatherburn side, I find the “Kilticisation” and “Braveheartism” of the SNP campaign both deceptive and hypocritical. Unlike Ireland, Scotland was never oppressed by the ‘British’ after the Union of the Crowns and many of the regiments that fought for the Hanoverian dynasty during the Jacobite rebellions were Lowland Scottish or Highland clans. There can be little doubt that firstly Tony Blair, with his cynical belief that a Scots Parliament would support Labour, and then Cameron by allowing himself to be thoroughly outfoxed by Salmond, bear a great deal of blame for the coming debacle. Whichever way the vote goes, the hornet’s nest has been stirred up. 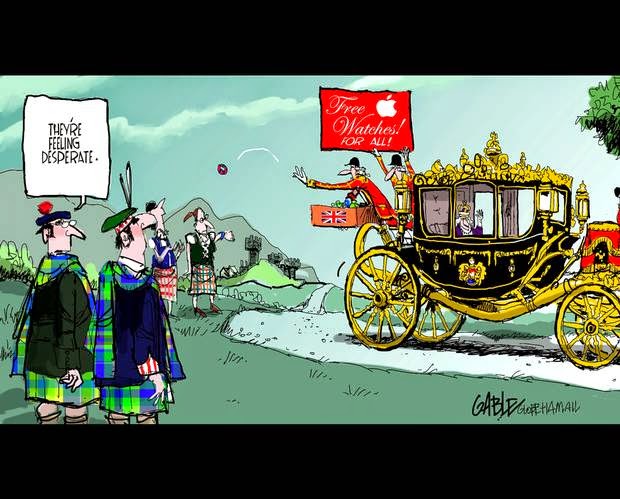 Posted by musings of an aging boomer at 12:16 PM