A Flatworm on the Move

DNA Barcoding: A flatworm on the move: yet another 'present' from the Third World on its way here. 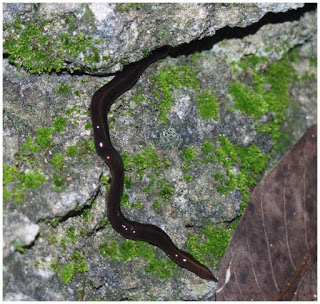 
Platydemus manokwari, the New Guinea flatworm, is a highly invasive species - "this should be considered a significant threat to North America".
Posted by musings of an aging boomer at 11:08 AM No comments:

The latest Canadian manifestation of the international rise in pressure on Caucasians to atone for the wrongs of colonization is the report of a federal Truth and Reconciliation commission for the study of the past treatment of native children at church-run schools and orphanages. One conundrum that arises from its appeal that we as our institutions apologize for the behaviour of mostly now-deceased individuals, is in finding a way to do that which also recognizes that the minorities persecuted by government in the past are not only our ‘first peoples’. The Acadian expulsion from the Maritimes has not benefited from government atonement, and probably should not. Displacement of the weaker by the stronger civilization is one of the forces that have shaped who we are throughout human history.

If every national government was required to atone for the many sins of previous generations, most older societies in the world would be thrown into chaos. American blacks descended from slaves, Ulster Gaels displaced by Protestant Lowland Scots and West Country English, Metis whose territory in Manitoba was removed from their management – the list of grievance is endless. How far back to we go? The Welsh were expelled from most of England and parts of Scotland when the Anglo-Saxons arrived.

Read more »
Posted by musings of an aging boomer at 12:58 PM No comments:

Where Will All The Old Folks Go?

Commentary by @michael.frind on 'Waterloo housing: the dream … and the surprising reality -  Despite a growing population, planners say home ownership patterns are shifting and the region doesn’t need much more suburban single-family housing' which appeared recently in the Toronto Star: 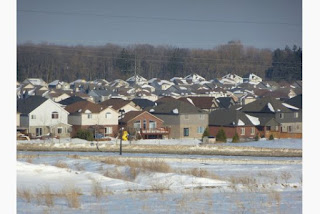 'The greenfield development industry likes to perpetuate the notion that Canada has a wealth of land, because of course they want to justify building more subdivisions. But in reality, Canada is not land-rich in terms of land that we can grow food on -- and this land happens to be the same land that is in close proximity to cities (and this is what makes that land attractive to urban-sprawl developers, so they buy it on speculation). And, Waterloo's farmland, like that of the Toronto area, is indeed excellent farmland - land which we cannot afford to lose.

So, urban economist Peter Norman is dead-wrong when he says "Canada is land-rich and it's part of our culture", because even though our gross land area is huge, the vast majority of our gross land is effectively undevelopable (in particular our vast northern areas). And, that's why our population is so heavily crowded along our southern fridge -- and most of that is concentrated in the Windsor-to-Québec-City corridor (so, including Waterloo Region, Toronto-Hamilton-Niagara, and so on). And, this corridor happens to be where most of Canada's prime farmland is located. So, we cannot afford to let the developers use this prime farmland as a speculative investment and make big bucks off suburban-izing the farmland that current and future generations will need to grow food on.

We should also remember that our need for farmland can be expected to be greater in the future than it is now, and this increase in needed farmland will be due to several factors: -
Read more »
Posted by musings of an aging boomer at 5:10 PM No comments: