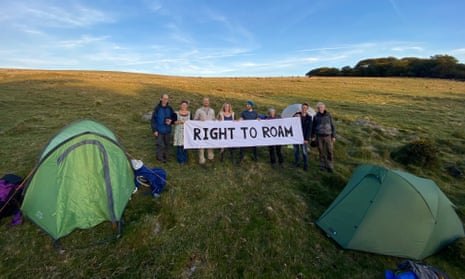 In England at present there is a furor over the right to what is called 'wild' camping i.e. outside managed campsites. The location for a keenly watched legal contest about the right to camp is storied Dartmoor, a national park where, as is usual there, some land is owned privately. I am familiar with Dartmoor Park as, when long ago in Bristol University’s Officer Training Corp, we roamed the moor’s roads in army trucks searching for a good pub to finish off the day's exercise. I did not then realize that much of the park was actually private land. The British public’s use of ‘rights-of-way’ footpaths over private land, a right stretching often as far back as the Middle Ages, is an oft-contested issue in such a crowded island, but this enthusiasm for camping out wherever is not something I recall from childhood.

On the formerly British lands across this continent there is a tradition of accepting walkers and campers on owned landscape where the right of passage has been legislated, negotiated or at least verbally accepted. Canada beyond the farmed lands very largely belongs to the government in right of the Crown. On occasion it leases parcels of land for settlement or minerals extraction, but otherwise one is free to roam, and to camp when distance or preference requires it.

Until I became elderly I did a great deal of camping across Ontario, Quebec and the contiguous USA. Our two children regard the experience as being among the best times of their youth. It is a fine way to get a feel for Mother Nature up close and personal. For example my daughter recalls opening our house trailer door one morning to find herself face to face with a curious bear cub when camping in a remote provincial park way up north in Ontario. Out bike riding on rough trails in the bush I had on occasion truly close encounters of a bear kind in suddenly confronting a large adult out ‘berry picking’. Perhaps the most thrilling experience of wilderness travel is, while canoe camping, hearing wolves howl across the water at night, the eeriest wild sounds I’ve ever known.

The right to ‘roam free’, whether in an often densely populated and heavily managed landscape such as Britain or in a wilder and much wider land such as ours, is, it seems to me, a key requirement in satisfying our innate urge to wander and to see what’s over the horizon. Ratty in the much-loved book Wind In The Willows is my prototype for this very human sensibility. New World lands like the one I choose to live in were created from this urge. Many of our most revered historical heroes were those who just had to see what lay ‘beyond’

Posted by musings of an aging boomer at 2:16 PM