The Big Lie as Propaganda

This sort of outrageous bombast was the ‘genius’ of Hitler and his cronies:- 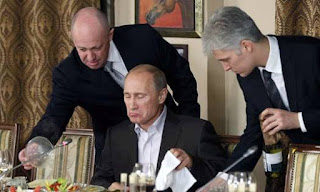 ‘Putin’s cook’ Yevgeny Prigozhin, left, serving food to Vladimir Putin at a restaurant outside Moscow in 2011.

Yevgeny Prigozhin accused of financing Wagner mercenary group responds to accusations of massacres in Mali. A Russian businessman and close ally of Vladimir Putin accused by the US, EU and others of financing the private military company Wagner Group has said that “a dying-out western civilisation” will be defeated by Russia.

The Guardian had approached Yevgeny Prigozhin seeking his reaction to evidence implicating Wagner fighters in massacres in Mali. In response he said he had “repeatedly said that the Wagner Group does not exist” and that he had “nothing to do with it”. “You are a dying-out western civilisation that considers Russians, Malians, Central Africans, Cubans, Nicaraguans and many other peoples and countries to be third world scum,” the businessman added. “Remember, this is not true …. You are a pathetic endangered bunch of perverts, and there are many of us, billions of us. And victory will be ours!”

Prigozhin said he was “closely following the events taking place in Mali” where “the collective west, namely the USA, Britain, France and other countries trying to pursue a policy of enslaving Africa, have been planting and organising terrorist groups in Mali for years”. This was being done, he said, “in order to keep the population of this country in fear, to plunder its natural wealth and to write off the money allocated for so-called peacekeeping operations”.’

Seems amazing tripe in these days…but only if we ignore history.

Posted by musings of an aging boomer at 1:25 PM