Nature's Place in an Urbanised World 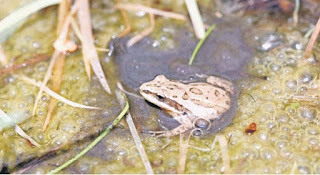 In June a landmark court case in the Province of Quebec accepted the principle that private development that destroys the habitat of threatened species can be forbidden on that basis alone. The ruling is opposed by both the municipality in which lies a rare Western Chorus Frog breeding area and the Quebec Government, and will be appealed.  Municipalities (such as Caledon where I live) in which there is a considerable amount of undeveloped and unfarmed land not publicly owned contain much biology that is un-surveyed and therefore unknown. Conservation authorities and others who wish to investigate the ecology of privately-held land need landowner approval, and this is not always granted. My home is my castle and my land mine to do with what I like is still the view of many. Attempts to preserve privately-owned heritage buildings and landmark trees run up against this outlook all the time.

As we in Ontario continue to urbanise northwards from the southern Great Lakes we not only destroy our best farmland, we eliminate the small ponds, marshes and woodlots that harbour what remains of native plant and animal life characteristic of this geographic zone. Rougher country like the limestone Niagara Escarpment that runs north through Southern Ontario, unsuited for farming and more expensive to develop, has been traditionally easier to protect. This favours the preservation of life-forms that utilize rocky and less fertile terrain over meadow dwellers. Shrikes and larks, many lepidopterans and native bees disappear.

A New York Times feature article of May 27th, by a Natural Sciences professor at an Upstate New York college and titled ‘The Silence of the Bugs’, describes what the author calls the beginnings of “an insect Armageddon” – the alarming decline in the observable population of flying insects. Think about how many of them splat onto your car’s windshield/screen or get stuck in your radiator grill versus the number in your childhood. It’s a lot less. This drop is reflected in the large scale declines of pollinators that threaten global horticulture. The writer is at pains to point out that the quantification of this potentially catastrophic phenomenon has been almost entirely done by volunteer naturalists (in Britain and Germany). The academic study of biology in the field rather than in the lab and at the cellular level is now a minor discipline compared with my 1960s university studies in Zoology, in which field trips and whole animal morphology were key elements of the programme.

Professor Stager quotes a 1996 editorial in the journal Conservation Biology, “Naturalist are dying off…Will the next generation of conservation biologists be nothing but a bunch of computer nerds with no first hand knowledge of natural history?”.  These days dedicated expert and amateur naturalists are more than ever necessary for us to have any sort of overall perspective on population shifts and environmental threats. Those of us who belong to naturalist clubs are becoming ever more conscious of the information gathering role we must play in creating some awareness of the many threats to the ecology in  the world’s most urbanised and developed countries, nation that are a too-ignorant custodian of a vanishing array of wild things and places.

In recent years the field trips and speaker roster of volunteer naturalists clubs in developed countries have become less of ‘a walk in the woods to see what we can see’ and more ‘let’s do a butterfly survey of this grassland’. We put emphasis on the less obvious components of our natural world – insects flying by, not just the birds, the trees themselves and not just a woodland’s spring flowers.
Posted by musings of an aging boomer at 12:56 PM