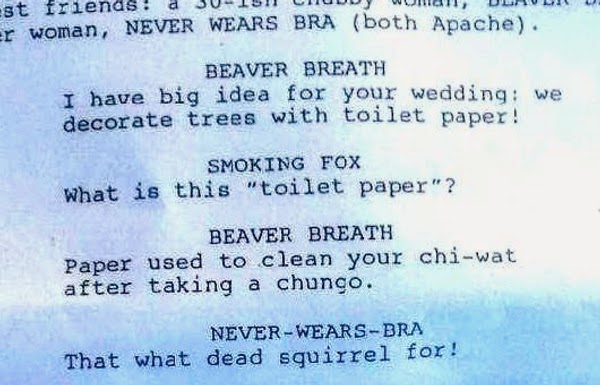 One of the lamentable consequences of today's avalanche of politically correctness in the Western World is a pernicious mantra that all cultures that share our planet must treat each other with absolute respect. That is to preclude any attempt at humour at each other's expense.

Until recently the only people in the public arena left who could even hint at anything politically incorrect were comedians !  Now however it seems there's to be nothing more taboo in today's increasingly multi-ethnic and multicultural but formerly Caucasian societies than to make fun of non-white behaviours. The most perilous idea of any for a joke is now one that involves aboriginals. While the foibles of the European populations that created the cultural  norms of the North American societies above the Rio Grande remain in open season, the activities of any indigenous inhabitants whose origins are non-white are to be totally off-limits to comical interpretation.

If every Newfoundlander threw a fit on the Mainland of Canada or every Scotsman in England because of the fact that a joke was made at their tribe's eccentricities, we'd never understand how enjoyable it can be when they are being themselves! What's the point in a diverse society of being denied any chance at using humour in a public place to point out the amusing ways we differ from one another? Better than resentment with no outlets, surely? Comedians provide a safety valve for each tribe's puzzlement about the rituals of its fellow inhabitants.﻿
Posted by musings of an aging boomer at 2:29 PM