"Longtime Canadians are being forced into becoming minorities in their own communities for no good reason", says Dan Murray of Immigration Watch Canada. 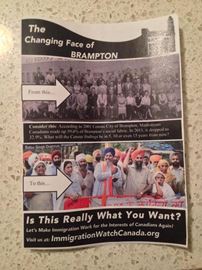 "This kind of message divides the community", says Bramalea-Gore-Malton MPP Jagmeet Singh, the first turbaned Sikh to be elected to the Ontario Legislature.

Public discourse on the impact on current residents of significant numbers of incomers over a short period of time, and the right of existing citizens to control who joins them in their communities, tends all to often to rapidly descend into bluster and hyperbole. The enduring legacy of 20th Century fascism and the ongoing reality of 'ethnic cleansing', even genocide, in certain parts of our globe, makes arguing for limits to multiculturalism and its alter ego, the formation of new mono-ethnic ghettos, a perilous undertaking.  What is being called 'White flight' is an ongoing reality, yet voicing the view that old-established communities have the same rights as newcomers to live surrounded by their own ethno-cultural group is somehow frowned upon.

Humans are tribal and customs still vary widely across societies. That has always been true and is likely to remain so. Understanding and honouring the customs of other 'tribes' does not equate to a necessity to accept that they have an unchallenged right to become en masse your near neighbours and in doing so alter the social status quo. This particularly applies when the beliefs, mores and ethics of the incoming group differ widely from those of the existing local society.

This is particularly poignant where government's ability to screen out foreign criminals attempting to immigrate has proved inadequate. There can be no good reason why the growing influence of the Mafia, 'Ndrangheta and similar organized criminal conspiracies within segments of the incomer population cannot be taken into account in relation to the degree of effort our governments put into accepting or encouraging further immigration from those countries.
Posted by musings of an aging boomer at 1:10 PM